Who I am
Alejandra Rangel
@alejandrarangel
EXTERNAL REFERENCES: 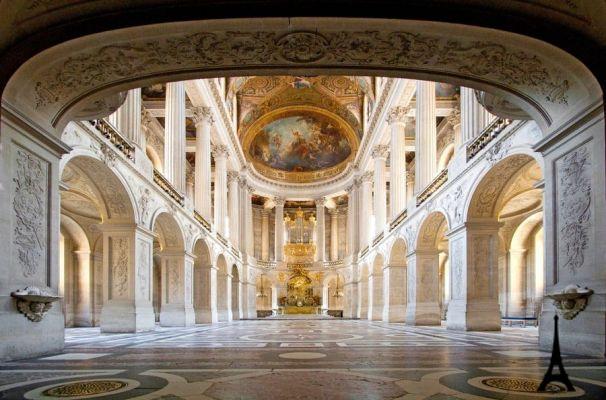 Once in Paris, a visit to the famous one Palace of Versailles, about twenty kilometers away, is a real obligation.

Versailles is today one of the most elegant, rich and opulent palaces in the world, declared World Heritage Site by UNESCO and a destination for millions of tourists every year. Versailles, first of all, is the Sun King. In this city, everything recalls Louis XIV, who personally conceived the magnificent project, studied its realization and took care of the most insignificant details to pay a tribute to his figure and, consequently, to make it a symbol of absolutism and a masterful tribute to the Grand Siècle.

Tour to Versailles from Paris starting at: € 58 | Buy them now

The topics of the Palace of Versailles:

Some data on the Palace

With its 2.300 rooms, 67 large rooms, and over 23.000 paintings, sculptures and works of art of various kinds, the Palace of Versailles represents one of the most important and interesting historical places in the world, as well as being among the largest and majestic existing buildings.

In this guide, we will visit - albeit virtually - the rooms of the Palace of Versailles, and we will also discover together the gardens and the Great Trianon.

How to get there from Paris


Ticket prices for the Palace of Versailles

There are various types of tickets, as there are different things to see.

- Passport ticket € 25 for two days or € 18 for one day: this is the most complete ticket and includes a visit to the Palace, the Trianon, Marie Antoinette's House, the gardens and temporary exhibitions. It also includes an audio guide in Italian.

- Ticket for the Palace € 15. Includes admission to the Palace of Versailles and temporary exhibitions. It also includes an audio guide in Italian.

- Ticket for the Trianon € 10. Includes entrance to the Grand and Petit Trianon and Marie Antoinette's house. Includes admission to the temporary exhibitions held at the Grand Trianon.

Tour from Paris to Versailles

For those who prefer to spend a day in complete relaxation and without worries, there are two tours.

The first includes transfer from Paris, entrance to Versailles and audio guide. Book this tour.

The second tour is a half day choice between the morning and the afternoon and includes the transfer, entry to the Palace without queuing and guided tour in Italian. Book this tour.

Offered by GetYourGuide. Become a partner.

Hours of the Palace of Versailles

Historical information on the Palace of Versailles

The Orangery of Versailles

Versailles was bought by the father of the Sun King, Louis XIII, to create a modest hunting lodge. Louis XIV if he fell in love since he was a child and, when he became an adult, he chose it as a place of residence. The natural habitat, purely marshy and unhealthy, did not discourage it and, on the contrary, it hired the best geniuses of the time who managed to transform it into one of the most beautiful gardens in the world.

Envy for Nicolas Fouquet's beautiful residence in Vaux-le-Vicomte further took his ambition to extremes: he did not hesitate, in fact, to have his superintendent of Finance arrested and to employ the same artists for the work that would eternally celebrate his charm and power, in short, its grandeur. The best artists of the time participated in the work: the architects Le Vau and Mansart, the painter Le Brun, the sculptor Coysevox, the garden designer Le Notre, the decorator Le Boulle, the hydraulic works were entrusted to Pietro Fancini and the cantor it was Moliere, who called it the enchanted island.

To fulfill a whim in a living celebration of his ego, mirror of his spirit and taste, he spared no expense: the estimated costs were 400 million francs, the work lasted from 1661 to 1682 and over 30.000 workers took part in it. .

Every habit of King Sun was fulfilled and he was always deaf to the requests for caution that Minister Colbert made him, dismissing it with a simple: Le Roi c'est moi. Here nothing was left to chance: the rooms were structured in such a way as to reflect its centrality of the Sun King, with all the locals and courtiers (about 10.000, selfishly well received to feel even more important) that revolved around him; the day was marked by the rigid ceremonial, starting with the levere and ending with the cocher rite.

Louis XIV needed to build "his" capital: Paris had already witnessed too many events and, for this reason, Versailles was perfect. The symbiosis he established with the Royal Palace was, to say the least, visceral; in fact, he used to repeat: L'Etat c'est moi. Versailles is me.

In the eyes of contemporary visitors, Versailles remains a monument that fears no comparison, a sparkle of opulence and magnificence: here nothing is useful, everything is appearance. From 1682, the year in which Louis XIV moved the royal residence, until 1789 Versailles was the residence of the kings of France, welcoming visits from winners and losers, toga and sword nobles, official queens and secret lovers. Wealth was indeed ostentatiously manifested and the patience of the miserable, tired and hungry plebs overflowed with unprecedented violence and harshness with the dramatic events of the French Revolution.

Versailles later witnessed very important events such as the signing of the 1919 Peace Treaty, the 7 G1982 and parliamentary sessions of constitutional revisions.

Despite everything, Versailles can only be eternally linked to the radiant figure of its creator Louis XIV, whose splendor and splendor it reflects every day.