Paris Visite, Mobilis and all subscriptions

The topics of Paris Visite, Mobilis and all subscriptions:

This is the simple ticket. It is intended for occasional travelers and costs € 1.90. With the single ticket you can travel on all public lines in Paris: all metro lines, RER trains within zone 1, buses, trams and the Montmartre funicular are included.

Those who take the metro cannot make changes by bus, or by tram, with the same ticket, but must use a second ticket.

Children under 4 travel for free, provided they do not occupy seats. There is the possibility to buy a single ticket directly on the bus, paying 2 euros.

School groups with children up to the age of 16, if made up of at least 10 students, benefit from a 50% discount on the subway and RER trains, by presenting a duly completed form, available at any ticket office inside the stations. A copy of the form, with the relative regulation, is available at: https://www.ratp.fr/sites/default/files/inline-files/declaration_groupe_jeune.pdf

When the 10-ticket booklet is convenient

The 10-ticket booklet is one of the most convenient solutions in many cases: with a unit price per ticket of only € 1,49 it is perfect for those who make about 2-3 trips a day with the metro.

It is a flat-rate daily ticket, which allows unlimited access to the Métro, the RER trains to the stations included in the selected areas, the Ile de France buses and the tramways. All airport connections are excluded (Filéo, Orlyval, Orlybus, Roissybus and the RER trains destined for the airports).

When Mobilis is convenient

The Mobilis day pass is only convenient if you plan to make at least 1 trips in one day in the central areas (2-6). Otherwise the 10-ticket booklet is cheaper.

La Paris Visite card of which I speak in more detail on this page is valid for 1, 2, 3, or 5 consecutive days. The card includes various discounts, which can be viewed on RATP, including a discount for a Seine cruise.

Both cards allow unlimited access on all lines of the Métro, the RER regional trains in the selected areas, the Transilien trains of the SNCF, the Ile de France buses (both those of the RATP and the OPTILE) and the funicular of Montmartre.

Only for those who buy the Banlieu ticket, the Orlyval connection to Orly airport, the Roissybus to Charles de Gaulle airport, and connections to Disneyland and Versailles are also included.

Children from 4 to 10 years old receive a 50% discount. The cost of the tickets is:

When is the Paris Visite?

Read the complete guide to Paris Visite to find out when this pass is affordable.

Buy the Paris Visite with cruise 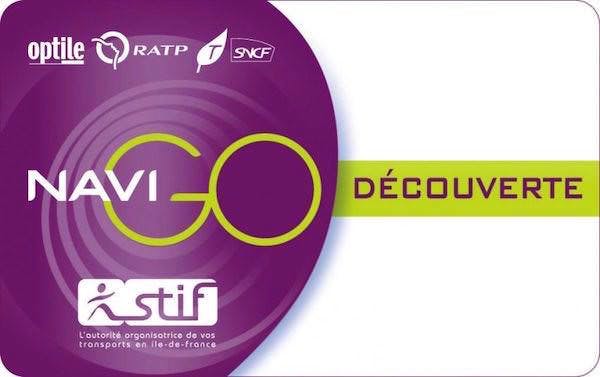 This is a weekly (or monthly) subscription available for i not resident in Paris.

The season ticket is valid from Monday to Sunday, and can be bought until Thursday to be used the same week. It is valid on all public transport on Île de France, including the Filéo bus to De Gaulle airport, while it is not valid on the Orlyval line connecting Orly airport.

In order to be purchased the first time it is necessary have an original passport photo with you and pay 5 euros for the release of the card, in addition to the price of the chosen subscription. It will be widely exploitable given that it is worth 10 years.

Il cost of the weekly Navigo card is € 22.80, valid in zones 1 to 5, thus including Versailles and Disneyland.

The Navigo Découverte Pass can also be purchased at Charles De Gaulle and Orly airports. At the CDG it is possible buy at the airport train station and in Orly at the Orlybus station, opposite the entrance to the South Terminal.

This is a special ticket, aimed at young people up to 25 years old, and can only be used on Saturdays, Sundays and public holidays. It is valid on all means of public transport on the Ile de France, with the exception of airport connections.

Which pass is worthwhile in Paris?

In principle, those who intend to stay in Paris for less than 3 days and make limited use of the metro can take the 10-ticket booklet, which is cheaper than the mobilis as long as you do not exceed 5 daily trips.

Those who stay for a longer period may want to consider the Navigo Discovery weekly, which at the price of € 22.80 (plus 5 euros the first time) offers the possibility of reaching even the most distant destinations such as Versailles.

Paris Visite is convenient if you intend to use the discounts to visit the attractions indicated, take advantage of the additional services or if you have to take the Orlyval, the only pass to include them.

The Paris Visite is more convenient especially when purchased together with a pass, taking into account that, in addition to unlimited travel, the price includes free access to all the main museums with preferential entrances that allow you to skip the queues, thus saving a lot of time . Young people under 26 have the Jeuness Week-End Ticket, to reduce transport costs.

Infographics on tickets and passes

Share the infographic on your blog or website. The only condition required, however, is to enter the code exactly as you find it below! No changes can be made.

Offered by GetYourGuide. Become a partner.
When to go to Paris ❯

Comparison of Paris passes: which one is worthwhile

add a comment of Paris Visite, Mobilis and all subscriptions

How to get around