What to see and do in Paris 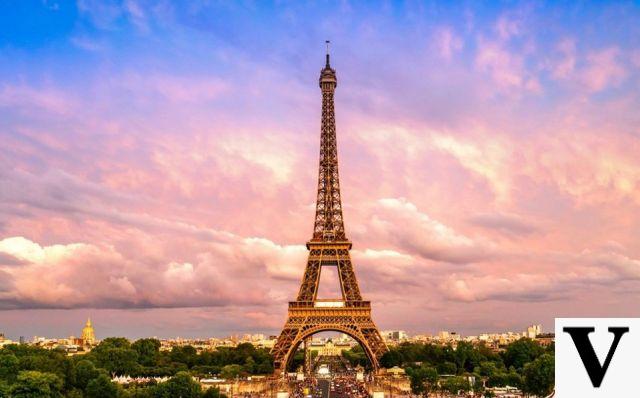 What to see in Paris

An exhaustive account of the French capital would require not one, but hundreds of articles. Among the data that support this thesis, perhaps the most emblematic is that of the museums: there are more than 150 and each one is worth a visit. Therefore, given the impossibility of seeing everything at once (unless you have enormous resources of time and money), you have to make a choice. A choice that in turn is good to take into account the unique mix of culture, art, history, entertainment and gastronomy that the city offers in large quantities. Here is our personal list of things to do and see in Paris. Happy reading.

The story can only begin with the Eiffel Tower, the most famous symbol of Paris. Inaugurated in 1889, on the occasion of the 10th Universal Exhibition (and on the centenary of the French Revolution), this gigantic tower, in the original project, should have been dismantled twenty years after its construction. Instead, not only did it survive the entire 20th century, but in the 21st century, thanks above all to the enormous potential of the Internet, it has definitively established itself as a global icon, capable of attracting millions of visitors each year. And to think that at the beginning the project was strongly rejected by Parisian public opinion. Some even called it "a threat to the history of France".

After the Eiffel Tower it is the turn of the Arc de Triomphe, another undisputed symbol of Parisian identity. It is located in the Place Charles De Gaulle, formerly Place d'Etoile, at the western end of the mythical Champs Elysees, which we will talk about in more detail in the next point. The Arch was much desired by Napoleon Bonaparte, who entrusted its construction to the architect Jean Chalgrin. The latter, however, died in 1811, five years after the beginning of the work, which was therefore inaugurated only in 1836, thirty years after the laying of the first stone. The inspiration is the Arch of Titus in Rome, although the Arc de Triomphe, emblem of the greatness of the Napoleonic empire, surpasses the monument of the Flavian period by almost three times.

According to many it is the most beautiful street in the world although, it must be said, for years it has been more popular and frequented by tourists than by Parisians. The latter flock to the Avenue des Champs Élysées especially for official celebrations (especially the 14 July parade) and for sporting celebrations involving the city and/or the nation. The road, almost 2 kilometers long, runs from the Arc de Triomphe to the Place de la Concorde. Queen Marie de Medici wanted it to be built in the early seventeenth century, with the intention of making it a continuation of the beautiful Jardin Des Tuileres (see next item). The tourist and commercial fortunes of the area began in the second half of the 19th century. The upper part of the avenue, the one that, so to speak, has the Arc de Triomphe as its top apex, is now a temple of luxury shopping: Versace, Dior, Luois Vitton, Chanel, Jean Paul Gaultier and many others (including Nike and Adidas) have a shop window here.

A must-see stop on a visit to Paris, the Jardin des Tuileries has several "arrows" in its bow. First, it is a beautiful place, born in the sixteenth century by "whim" of Caterina de 'Medici who, after the construction of the eponymous palace, wanted a place of entertainment for ceremonies and banquets . This was at the beginning, because later - and we come to the second point in favor - the garden was opened to all social strata of the city and was equipped with cafes, kiosks, hammocks and public toilets.

Giotto, Beato Angelico, Botticelli, Leonardo, Michelangelo, Caravaggio, Parmigianino and many others. The collection of Italian art would be enough to qualify the Louvre as the most beautiful museum in the world. And yet, it is not finished because there are also exhibitions dedicated to Oriental, Egyptian and Greco-Roman art. In short, painting, sculpture and archaeology make the Muséè du Louvre an unmissable stop on a visit to Paris. Millions of visitors each year venture into this building which contains around 30,000 works of art (the estimate is underestimated). It has been calculated that it would take 100 days to see everything, provided you spend a few seconds in each room.

From a former royal house (Louvre) to a former train station (d'Orsay) or, if you prefer, from Leonardo, Michelangelo and Titian to Van Gogh, Gaughin and Cezanne. And yes, because the Musée d'Orsay offers one of the world's most comprehensive overviews of Impressionism and Post-Impressionism. Not only. Urbanism, architecture, design and cinema are the other themes dealt with in this former railway station converted into a museum in 1986 from a project by the Italian architect Gae Aulenti .

After the Louvre and the Musée d'Orsay, it is the turn of the Centre Pompidou. If the first two, in fact, shed light on the artistic, historical and cultural past of France and Europe, the museum space desired by the President of the Republic, Georges Jean Raymond Pompidou, illuminates the present and the future of the transalpine nation. Built in the 1970s, this museum has profoundly revived the cultural life of Paris. Not only because of the numerous works on display (including Matisse, Kandinsky, Mirò, Picasso) but precisely because the building as a whole was designed and built as a break with the architecture that had accompanied the urban development of the city.

The beating heart of '68 in Paris, Le Quartier Latin stretches between the 5th and 6th arrondissements of the city. So, despite the name, it is not a real neighborhood, but a larger area with specific peculiarities. The first, of a historical nature, refers to the fact that there was a time when academics and students of the Sorbonne (see photo) actually spoke Latin to each other (hence the name). The second is the presence of the Pantheon, the monument built by Louis XV in honour of Saint Geneviève (Sainte Geneviève, patron saint of Paris). Several prominent personalities are buried inside this monument: among others, Jean Jacques Rosseau, Emile Zola and Victor Hugo.

Along with the Eiffel Tower and the Louvre, Notre Dame Cathedral is the most visited monument in Paris. A majestic church dating from 1163, the year in which the then bishop Maurice De Sully gave the order to build a building that would also symbolize the status of the city's capital on a religious level. The invitation was accepted over time (for the completion of the church it took, in fact, about 2 centuries) by thousands of carpenters, blacksmiths, blacksmiths and artists able to create a masterpiece of Gothic art that still, from a distance of hundreds of years, fascinates even those who are completely lacking in art history. It must be said that the church over the centuries has undergone several changes, the most serious of which undoubtedly during the tumultuous years of the French Revolution. It was only in the 19th century, specifically after the literary fortune of Victor Hugo's novel of the same name ("Notre Dame de Paris"), that the desire arose to put an end to the decadence that had taken hold of this majestic temple overlooking the Ile de la.

The attraction of a trip to Paris can not miss the Palace of Versailles. There is perhaps no building in the world capable of so eloquently evoking the idea of power without losing, however, harmony and grace. It is enough to consider two aspects to better focus what we are talking about: firstly, the fact that the area where Louis XIV (1638-1715) wanted to build the palace was marshy and surrounded by woods. It is not surprising that Louis XIII, father of the "Sun King", used it as a hunting ground. The second aspect to take into account is the overcrowding that characterized the palace for several years.

Montmartre is another must-see on a visit to Paris. A neighbourhood with a strong bohemian soul, for a long time it has been a refuge for the artistic avant-garde that passed through the city. Not only artists, in fact: political struggle, combined with a marked intellectual fervour, has always marked the days of this hilly area from which, we remember, the revolt of the Paris Commune began in 1871. For some time now, commerce and tourism have replaced artistic experimentation and political passion, although the fascination of a sui generis locality, of a true "city within a city", has survived in its inhabitants. has survived in its inhabitants.


What to do in Paris

So far we have explained what you can see in this wonderful destination and its surroundings in terms of tourism and culture. If you are more adventurous and want to live unique experiences, don't worry, Paris is the perfect place.


When to go to Paris ❯

When to go to Paris

add a comment of What to see and do in Paris