The 9 best monuments in Paris 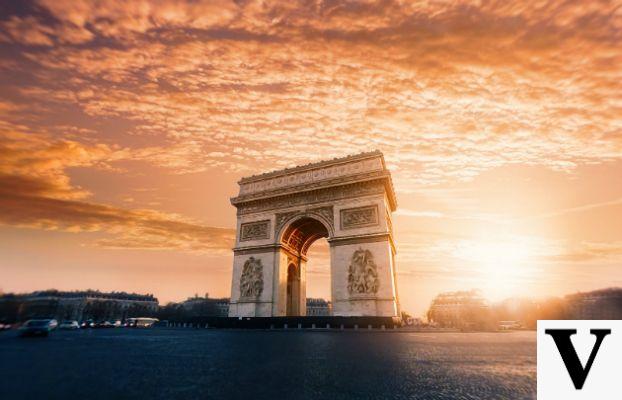 Designed by Gustave Eiffel, the Tower was built in just over two years by 250 workers. Initially it was a subject of controversy, as many considered it a horrible construction. Due to its low profitability, once the exhibition was over, the possibility of destroying it was evaluated.

Unless you suffer from vertigo, climbing the Eiffel Tower is a unique experience, recommended for any tourist traveling to Paris. You can reach the tower by elevator or by climbing the stairs. Before choosing the second of these two options, it is important to know that the stairs have 1,665 steps.

The name of the cathedral means "Our Lady", being dedicated to the Virgin Mary.

In its eight centuries of history, the Cathedral of Notre Dame has been renovated several times, with a major intervention made in the nineteenth century, when the flying buttresses were replaced, the rose window was inserted in the south area, the chapels were placed renovated and added statues.

Notre Dame consists, on the facade, of two towers of 69 meters. Accessing from the top of the towers, besides being able to enjoy fantastic views, you can visit the bell tower where the mythical Hunchback of Notre Dame lived and see its gargoyles up close.

The Arc de Triomphe is, along with the Eiffel Tower, the most representative monument of Paris. With its 50 meters high and a base of 45 by 22 meters, it commemorates Napoleon's military victories.

Its construction preceded that of the Arc de Triomphe and the Eiffel Tower and was the first place from which you could see Paris from above.

The construction of the Pantheon took place between 1764 and 1790, initially directed by Jacques-Germain Soufflot and completed by Jean Baptiste Rondelet. It was designed with the intention of stylistically combining the simplicity of Gothic with the majesty of Greek architecture.

Throughout its history, the Pantheon fulfilled different functions; in the 19th century it was used for religious but also patriotic purposes, according to the current political regime.

The imposing architectural complex of the National Palace of the Invalides (Hôtel des Invalides) was built in the 17th century as a residence for French soldiers, who had served in the army.

In 1674 the first guests began to arrive at the palace, reaching 4,000 by the end of the century. Soldiers who had served in the French army for more than ten years could retire and, contrary to what one might think, they did not spend their time telling anecdotes about the war and playing cards, but learned new things and, among their various daily activities. tasks, they mended uniforms and mended broken shoes.

The Opéra Garnier is an imposing neo-baroque building which, together with the Opéra de la Bastille, forms the Opéra National de Paris . It was the place that inspired the famous novel "The Phantom of the Opera".

By decision of Napoleon III, a competition was launched in which 170 architects participated with their projects, for the construction of a new building for the site. The competition was won by the young architect Charles Garniere, who carried out the design of the building.


Walking through the Opera, you can see the opulence and luxury of the Palazzo; in the past, those who attended the Opera did so not only to attend the performances, but also to show off their social status.

Basilica of the Sacro Coure


The work of Paul Abadie, the Basilica of the Sacred Heart (Sacré Coeur) is located at the top of Montmartre, on a hill 130 meters high, from where you can see Paris from above.the basilica began construction in 1875 and was not completed until 1914. It was consecrated five years after its construction, on October 16, 1919.
The dimensions of the Sacré Coeur speak for themselves: 83 meters long, 35 meters wide and a tower 83 meters high.


The Sainte Chapelle is a Gothic style church built between 1242 and 1248 to house the relics of the Passion of Christ, composed of the Crown of Thorns and a piece of the Holy Cross. It is located on the Île de la Cité.
With the purchase of the Holy Relics from the emperors of Constantinople, Louis IX succeeded in increasing the prestige of Paris on a global scale and making it the second capital of Christianity. The relics cost three times the cost of building the church.


The Palace is located in the commune of Versailles, a town that, between the seventeenth and eighteenth centuries, was the capital of the French kingdom.

Declared a World Heritage Site more than thirty years ago, the Palace of Versailles is one of the most famous palaces in the world, not only for its impressive architecture and its extensive and well-kept gardens, but also because it is an important part of the history of France.

add a comment of The 9 best monuments in Paris