Who I am
Aina Martin
@ainamartin
EXTERNAL REFERENCES: 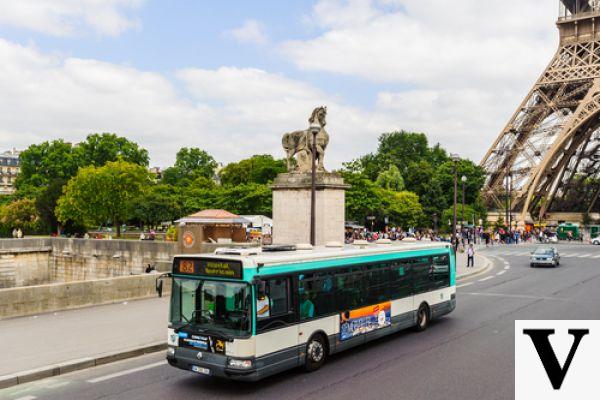 Getting around and moving around in Paris: transport guide

The metro of the French capital is the best answer to the question "how to move around Paris", the most comfortable and quickest solution, although the city has a wider and very efficient public transport system, well integrated and widespread, able to cover every area of the city, central and peripheral.

Metro, RER trains, buses, trams, bicycles, taxis, boats on the Seine. We explain how they work, schedules and ticket prices and the best solution to save on transport and visits to the main attractions of Paris with the Paris Visite and Paris Museum Pass tourist cards. Renting a car? Not convenient.

How to travel from the airport to central Paris

From these two airports you can reach the center of Paris in three ways:

The Paris metro, capillary and articulated, travels from one end of the city to the other, covering all areas. Take a look at the map to get your bearings and understand how it works. It is easy to walk but, initially, you will see it as a maze. It is still the most comfortable and fastest way to get around the French capital.

It consists of 16 lines (numbered from 1 to 14 with the addition of 3 bis and 7 bis) with different colours and numbers and a total of 300 stations. By finding the station closest to your starting point on the map, you will be able to locate your destination station. The white circles on the map will help you to understand which are the points where you will have to change trains to take the connection to other lines: a good suggestion is given by the symbols linked to the corresponding number and colour. The metro is active every day from 5.30am to 1am (Friday, Saturday and public holidays, it closes at 2am) with frequent routes (slower on Sundays and public holidays).

Getting around on the RER line

The metro is integrated with the 5 train lines of the RER (Regional Express Network, the suburban metro network) which reach the peripheral areas and connect them to the central area. The 5 lines are marked with the letters A, B, C, D, E and are connected by metro and bus. The trains are fast and comfortable, with frequent journeys (from 3 to 6 minutes) and fewer stops than the metro.


Particularly noteworthy are the trains that reach areas far from the centre such as Disneyland and Versailles. The RER operates from 4.45 am to 1.30 am. (including holidays).

Trams and buses are an efficient and convenient alternative to the metro; in particular, buses are very useful at night when the metro is closed.

The mythical Parisian trams, which were the only means of public transport during the Belle Epoque, have been supplanted by the metro but have recently been rediscovered because they are comfortable, fast, economical and ecological. Active from 4.50 am to 11.40 pm with frequent routes (5 to 7 minutes), there are four new tramway lines:

Buses (which stop with a wave of the hand) run from 5.30am to 8.30pm (several lines run until 0.30am) from Monday to Saturday, some also on Sundays and public holidays. The night buses of the Noctilien service (marked with the letter N) operate from 0.30 to 5.30 in the morning. It is easy to recognise a bus running in the city centre from one moving towards the suburbs: the former shows a 2-digit number, the latter (towards the suburbs) a 3-digit number.

The 42 Noctilien lines connect the four main stations (Gare de Lyon, Gare Montparnasse, Gare Saint-Lazare, Gare de l'Est) with the most popular tourist areas (Champs-Élysées, Saint-Germain-des-Prés, Bastille, République, Pigalle, Place de Clichy). The ticket, valid for 90 minutes, can also be bought on board the bus (ask the driver), but it will cost you a bit more.


For tourists, they are also active:

The T + single ticket (valid for 90 minutes) costs 1,70 ¤ (1,80 ¤ if bought on board the bus). It is valid for metro, RER trains (zone 1), RATP buses and Noctilien night buses. Please note that the same ticket cannot be used for metro-bus, metro-tram, REP-bus or REP-tram combinations. The alternatives to the single ticket are the day ticket ( Mobilis ) valid from 5.20 a.m. to 1 a.m. for all public transport or the 10-ticket booklet which costs 15.50 euros.

The cost of Mobilis varies according to the areas:

The weekend ticket is designed for children under 26 years old travelling to Paris on weekends. It allows unlimited use of all public transport on Saturdays, Sundays and public holidays. The price varies according to the zone: from 4,85 € (zone 1/3) to 9,35 € (zone 1/5).

Paris Visite prices vary according to the zones to be visited and the duration:

Paris Visite can be purchased at the main metro stations, RER stations, airports or even at a travel agency before departure. It is valid on metro, RER trains, buses, trams, Montmartre funicular, Noctilien, Montmartrobus and SNCF trains. It is not valid on tourist buses, on the Voguéo boat crossing the Seine, on the Jetbus, Air France and Allobus Roissy networks (to Charles De Gaulle airport). Admission to the museums is free up to the age of 26. Those over this age can buy the Paris Museum Pass to save on entry to some 60 of Paris' most important museums.

Costs vary according to length:

The 15,000 Parisian taxis circulating in the French capital charge quite affordable fares.

The average fares are:

It is also true that the fares vary, in addition to the final destination, according to the timetables:

To the basic fares, as always, you have to add supplements for additional passengers and luggage. It is not always easy to find a free one on the street, so it is better to book one by phone or look for one parked near the train stations.

Paris boasts the beauty of 200 km of bike paths for tourists: certain areas (parks or avenues surrounding the Seine) on Sundays are reserved for cyclists, pedestrians and rollerbladers. Cycling in Paris is safe and is particularly fun and enjoyable in summer. It's called Velib, the public service bike rental since 2007: prices are cheap and the first half hour is free. There are numerous Velib rental points throughout the city.

Getting around by boat

The most romantic and original means of transport, which allows tourists and locals alike to admire the beauties of Paris from a different and fascinating perspective, is to board a boat crossing the Seine. With a ticket valid for 1 day (11 euros) or 2 days (13 euros) you can take the Batobus , a river bus that departs every 25 minutes, operating every day from 10am to 7pm (until 9pm in the summer months).

The Restaurants on the Eiffel Tower