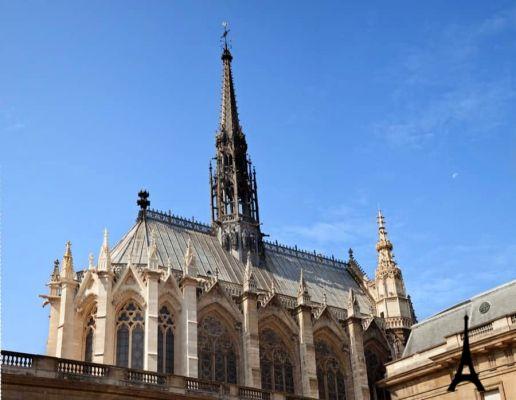 Paris is one of the most visited tourist destinations in the world for the beauty of its landscapes, the magic of the settings and the romanticism of some views where you can see the Eiffel tower or the Seine. The French capital is home to a huge number of monuments and works of art of great value, as well as being considered the most romantic city in the world.

In this context of enormous historical and cultural richness, the stupendous church of Holy Chapel (or Holy Chapel), a pearl of Gothic architecture located in the heart of the French capital. The church is in fact built on the Ile de la Citè, a small island in the Seine that acts as a link, thanks to its beautiful bridges, between the left bank and the right bank and where the first outbreak of the city of Paris was born, already in the XNUMXst century BC

The islet today houses large public buildings such as the Palace of Justice, the Prefecture and the Commercial Court and is therefore configured as an administrative center of great importance and liveliness. Obviously a special mention, among the buildings of the Ile, goes to the magnificent Cathedral of Notre Dame, famous all over the world and visited by millions of tourists every year.

The topics of Sainte Chapelle, Paris:

The Sainte Chapelle belongs, together with the Palazzo della Conciergerie, to the monumental complex of Citè Palace which, in the past, was a revolutionary court and a prison where it was Maria Antonietta was also imprisoned. The Palais de la Citè has been the seat of royal power in France since the XNUMXth century when Clovis, the first king of the Franks, chose it as his home and then from the XNUMXth to the XNUMXth century it was the seat of the royal council and administration.


The church it was consecrated in 1248 and was built at the behest of Louis IX in just seven years, an almost impossible feat for the time. It it was destined to hold precious relics of Christianity, including the crown of thorns of Jesus Christ, recovered by Louis himself (who was later declared a saint) and a piece of the cross in which Jesus was crucified. The possession of relics of such importance made the French sovereign, already very powerful, of made the head of Western Christianity.

Architecture of the Sainte Chapelle

From the architectural point of view the church is 36 meters long, 17 wide and 42,50 high and is composed of two superimposed chapels. In lower chapel, a place of worship for service personnel, the vaults are supported by a heavily restored colonnade in the XNUMXth century; the only original parts (not restored in the following years) are the tombstones of the floor.

The entrance is manned by the statue of the Virgin, patroness of the sanctuary, who welcomes visitors. There upper chapel it was, however, reserved for the royal family and high officials who could access it through an outdoor terrace. It is characterized by the splendid stained glass windows that represent the distinctive feature of this monument.

Interiors and exteriors: the windows and the facade

Internally the gaze is immediately captivated by the bright colors of the 15 huge windows of which the church is composed. Each of these is 15 meters high and all the colored glass represent well 1113 religious scenes, coming from the old and new testament, in which the history of the world is told from Genesis to the resurrection of Jesus. The whole structure of the walls seems only a banal stone frame, leaving the center of the scene just to the wonderful windows. Outside the church you can see a very high spire, a typical element of the Gothic architectural style, which aimed to expand in height to get as close as possible to the divine.

The best time to visit is during the day, before the sun sets. In this way you can enjoy the fantastic spectacle offered by the rays of the sun that are reflected in the windows of the facade, offering a kaleidoscopic effect that captivates the eyes and leaves you breathless. From a climatic point of view, the spring period is preferable, as it allows you to avoid, on the one hand, the cold and rainy winter days and on the other, the sultry heat of the summer months. Furthermore, avoiding July and August, you are not even forced to enter endless queues.

To visit the church you have to go to the entrance of the Palace of Justice, at number 8 of Boulevard du Palais, the avenue that comes directly from the Saint-Michel district, on the other side of the bridge and cuts the island in two. The entrance from the courthouse means that there is always enough queue due to the security checks, so our advice is to go to the opening hours.

How to get to the Sainte Chapelle

Reaching this jewel in the heart of the French capital is very simple as the church is located, as mentioned, in the center of the Ile de la Citè, a few steps from the Notre Dame Cathedral. You can get there using the metro line 4, getting off at the "Citè" stop or, for those who prefer to take the bus to enjoy the city on the surface even while on the move, the useful lines are 21, 27, 38, 85, 96 and the Balabus.

The church can be visited every day, with few exceptions (January 1st, May 1st and December 25th), from 9.00 am and with closing times ranging from 17.00 pm in the periods from January to March and November / December, to 18.00 pm on period from April to October until evening openings (until 21.30 pm) from mid-May to mid-September.

The full entrance ticket is € 10 but there is free admission for young people up to 25 years old. In addition, there is the opportunity to buy a combined ticket for € 15 which also allows a visit to the Conciergerie, a historic building located in the same complex as the Chapel.

Admission is also included in the Paris Pass

How to visit the Basilica of the Sacred Heart, Paris