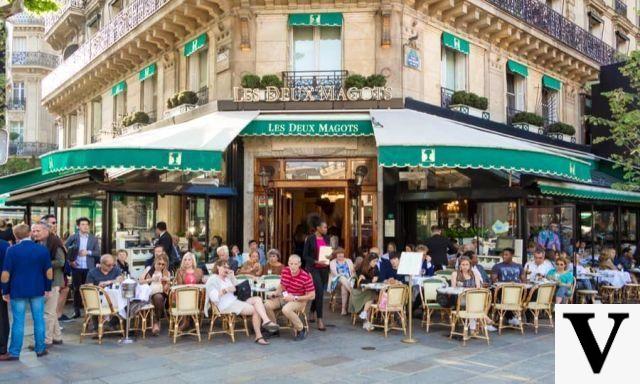 Un trip to Paris it cannot be defined as complete if we do not allow ourselves a leap into the beautiful e picturesque district of Saint-Germain-des-Prés.

This elegant and charming neighborhood, which includes the 6th arrondissement and the easternmost part of the 7th, was lively after World War II by some of the greatest avant-garde artists and intellectuals, such as Jean Paul Sartre or Simone de Beauvoir, in clubs that have gone down in history, such as the Caffè Flore e il Les Deux Magots. From that period, Saint-Germain-des-Prés retains its charm to which a high-level commercial aspect has been well integrated which has contributed to giving it a very refined and sober appearance.

In the heart of the neighborhood rises the church of Saint-Germain-des-Prés, in the square of the same name, the only remaining building of the immense Benedictine abbey which, since the sixth century, occupied most of the district's territory.

A few steps from the church is one of the squares considered (rightly) the most fascinating in the city, place de Furstenberg: refined location which, thanks to its characteristic candelabra lamp posts and planted paulonias, manages to make millions of tourists fall in love every year and whose atmosphere was also enchanted by Martin Scorsese who chose it as the final scene of his "The age of innocence" (1993).

In the north-western area of ​​the square is what was, since 1857, the artist's house Eugène Delacroix, one of the leading exponents of the French Romantic movement, where he died there in 1863. The house has been transformed into a monographic museum where we can admire many sketches and preparatory drawings, as well as personal objects and the room where the artist died. Let us not delude ourselves, however, to see the most famous works of the painter which, in Paris, are kept at the Musée d'Orsay and the Musée du Louvre (here is the famous painting “Freedom that guides the people” from 1830).


Of Delacroix, Saint-Germain-des-Prés houses not only the house-museum, but also three valuable frescoes in the Saint Sulpice church. This is the Parisian church which, in size, is second only to the Cathedral of Notre Dame and attracts many tourists not only for the frescoes by Delacroix, but also for the eighteenth-century organ with five keyboards. More recently, the imposing classical-style church built in the XNUMXth century has become particularly popular due to the mid-XNUMXth century solar observatory, to which writer Dan Brown has reserved an important role in his best-selling book, " Da Vinci's code".

Outside the church, in the Saint-Sulpice square you can breathe a very refined atmosphere, thanks to the numerous high fashion boutiques that numerous fashion houses have opened and the imposing fountain with lions in the center of the square.

The Palais overlooking rue de Vaugirard, the longest street in the city, has been the seat of the French Senate since 1958; to the west of the Palais, still inside the Jarden, there is theOrangery which in winter acts as a greenhouse for numerous park plants that return to color the park only with the mild climatic conditions of spring. In September, the Orangerie hosts the Expo-Automne, an interesting and colorful exhibition of flowers and fruits mostly coming from the flora of the Garden.

North of the Orangerie is the Luxembourg Museum, the first French museum open to the public (in 1750), which annually hosts about forty of the most prestigious art exhibitions in the city.

Just outside the Jarden is the imposing neoclassical facade that distinguishes the Odeon Theater, inaugurated in 1782 and one of the last works created by King Louis XVI, before the outbreak of the French Revolution.

A little further north of the Odeon we find the Ecole de Médecine (Faculty of Medicine) which is not the only study center in the neighborhood. On the banks of the Seine, in fact, in correspondence with the splendid and wooden Pont des Arts, there is the Institute has the Académie Française, deputy - among other things - to preserve the integrity and purity of the French language from Anglo-Saxon contamination.

Adjacent to the Institut de France we can visit the Hotel des Monnaies, formerly a state mint, now home to the Musée de la Monnaie, a favorite destination for lovers of numismatics which also preserves some minting tools. If, on the other hand, we want to give a real reading to the pages of history, written by the protagonists, in the nearby rue de Nesle, at Museum of Letters and Manuscripts, we will find a rich repertoire of letters written by great statesmen (such as Franklin Delano Roosvelt or Winston Churchill) or equations and scribbles written by Albert Einstein.

Walking along the Seine, towards the west, you reach the famous Musée d'Orsay, a renowned art destination that houses the most valuable collections of impressionist and post-impressionist art. The immense and extraordinary glass and steel dome reminds the visitor that the structure is a former railway station: it remained for decades in a state of neglect, so much so that in the XNUMXs it became the scenographic set for "Il Process", taken from the homonymous Kafkaesque masterpiece and shot by Orson Welles, it was successfully redeveloped, based on the project of the architect Gae Aulenti.

A visit is a must both for the masterpieces that have made the history of art, such as "Breakfast on the grass" by Eduard Manet or "Self-portrait" by Vincent Van Gogh, and for the paintings by artists such as Paul Cezanne, Edgar Degas, Claude Monet, Pierre Auguste Renoir, Paul Gaugain or Henri de Toulouse-Lautrec, but also for the priceless view of Montmartre that the café terrace offers.

Allowing us, then, a walk through the inner streets of the neighborhood, you can admire the harmonious combination of noble residences of the seventeenth and eighteenth centuries next to medieval houses; among the numerous buildings and residences, we will not struggle to recognize what was the home of Serge Gainsbourg, in rue de Verneuil, a pilgrimage destination for the many admirers of the artist who died in this house in 1991.

In rue de l'Ancienne Comedie, at the intersection with rue de Buci, a small detour will make us discover two important places in the history of France: the Cour du Commerce Saint-André, where the politician and revolutionary's printing works used to be Jean-paul marat, murdered in 1793 by the girondina Charlotte Corday, as the famous painting by David reminds us, and a little further on the house of the infamous Dr. Guillotin where he studied and perfected the instrument of the same name that executed millions of people.

Finally, at the western end of the neighborhood is the area Sévres-Babylon mostly known as a commercial destination. At the Carrefour de la Croix Rouge in 1871 - period of the Paris Commune - a large barricade was erected and since 1983 it has housed the statue of César's Centaur.

Just over the border with the 7th arrondissement it is located Le Bon Marché, the oldest department stores in Paris, also mentioned by Emile Zola. Nearby, in 1830 the Virgin appeared to a young nun, Catherine Laboure, asking her to have a medal struck that would be miraculous for anyone who wore it: the nuns accepted the invitation and had a church built, Notre-Dame de la Médaille Miraculeuse, in the place of the apparition.

RECOMMENDED HOTELS IN ST. GERMAIN
St. Germain is one of the most beautiful and elegant districts of Paris. In the neighborhood you can also find the Luxembourg Gardens for a pleasant green walk. Very central district.
Recommended hotels in St. Germain

Pigalle: what to see ❯

The Planted Walk in Parigi

The Porte Maillot area in Paris