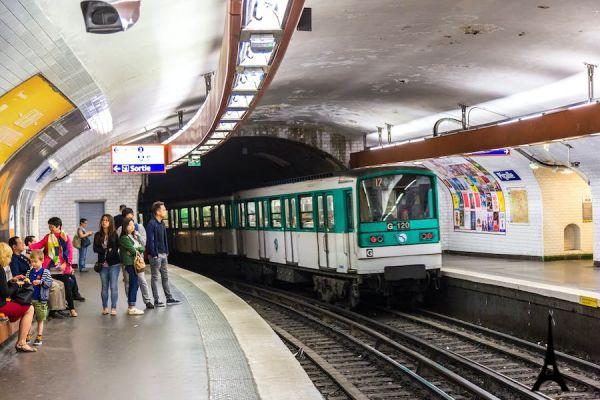 Public transport in Paris includes the metro, RER trains, buses, night buses, the Montmartre funicular and the Montmartre Bus (tourist bus to visit the district of the same name, departing from Place Pigalle).

All transport is managed by the public company RATP.

The tariff zones of Paris

The Paris Region (Ile de France) is divided into 6 zone concentric and the metropolitan area goes from zone 1 to 5. Charles de Gaulle airport and Disneyland are in zone 5, Orly and Versailles in zone 4, while the center of Paris is in zone 1, which is located within the Boulevard Peripherique, the equivalent of the Grande Raccordo Anulare of Rome.

Most of the metro lines do not exceed zone 1, except for a few that cross zone 2. If you only use the subway and not the RER, don't worry about the tariff zone as tickets are valid for any zone.

The case is different if you use the RER lines: the RER are the regional trains used mainly to reach areas outside Paris, such as eg. airports, Versailles or Disneyland. Using the RER, if you do not have packages that also cover other areas, the tickets are valid exclusively for zone 1.


A classic example of this difference in fare zones between metro and RER provides it to us eg. La Defense: this is located in tariff zone 3, but if we reach it by metro, a simple ticket is fine, if instead we use the RER (and we do not have passes that cover other zones) a special ticket that is much more expensive is required!

So be careful to take the metro (line 1 in this case) and to use the exits for the metro and not those of the RER that require the insertion of the ticket.

The Paris Metro includes 16 lines, each of which has a different color and number, so you can orient yourself easily. The lines go from 1 to 14 plus 3bis and 7bis.

In this interactive map you can see which metro lines reach certain areas and calculate the various routes.

The lines and the main junctions

Once you have landed in one of the three Parisian airports, unless you choose a private vehicle, surely the first question you will ask yourself will be: how do I get to my hotel? Which metro lines should I take?

Case 1: arrival at Beauvais airport.
In case you land at Beauvais airport you will almost certainly take the bus that leaves to coincide with the arrival of the Ryanair flight. The bus will drop you off in Paris at Porte Maillot.

Here passes the metro line 1 (one of the most used by tourists, as it touches many of the central attractions) and the RER C.

Hotel in zona Tour Eiffel, Invalides, Museo d'Orsay, St. Michel-Notre Dame: take RER C from Neuilly-Porte Maillot station, which will drop you off near your hotel.

Hotel in zona Trocadero, Montparnasse, Denfert Rochereau, Place d'Italie: always take line 1 from Porte Maillot and then change at the Charles de Gaulle Etoile interchange station, where in addition to line 1 pass lines 2, 6 and RER A (which leads to Disneyland). You need line 6 (direction Nation) which will take you near your hotel.

Latin Quarter hotels, Luxembourg: Line 1 from Porte Maillot and then change at Chatelet Les Halles, one of the main stations in Paris, as the RER A, B, D stop here and in the connected Chatelet metro station, 1, 4, 7, 11, 14 You need the RER B.

If, on the other hand, you land at Orly Airport or CDG, click on the respective links to find out how to get around.

The metro does not work 24/24 but has times that we must take into account, especially if we like nightlife.

Times vary by a few minutes depending on the metro line. In general they are however: from Monday to Thursday it operates from 5:30 to 1:15, from Friday to Sunday until 2 in the morning. The timetables obviously refer to the departures from the terminus, so they will pass later in the central stops.

On the occasion of the New Year's Eve in Paris moreover, the metro runs undergo variations both in terms of timetable and in terms of cost. In fact, some lines, usually 1, 2, 4, 6, 9 and 14 run all night and are free until 00:30 on January 1, this to allow the "revelers" to return home or to the hotel.

Il Paris Visite is a tourist pass for unlimited travel on all means:

With this pass it is possible to take all means of transport with unlimited rides in zones 1 to 3 or 1 to 5 and therefore also gives some freedom in using the RER.

Considering the sporadic use of the metro and therefore about 4 trips a day, € 5,96 is spent daily, taking as a base price the cost of the t + tickets included in the 10 booklet.

So the Paris Visite is not particularly convenient, unless there are at least six trips a day by metro or other public transport. It is also not convenient if you land at Orly or CDG airports or want to go to Disneyland or the Palace of Versailles.

La Paris Visite is also included in the Paris Pass and that therefore if you buy the latter it will not be necessary to make an additional transport pass.

Where to buy: Tickets and the 10 booklet can be purchased at metro, bus, RER train stations and authorized shops.

It is a weekly or monthly pass that tourists can also do. In fact, it could happen that an employee refuses to issue the pass, saying that it is only for residents. You specify that you want the Découverte!

The purchase process is a little more laborious than the other passes as, at the cost of the rates (found below), you have to add € 5 for the issue of the pass which is valid for 10 years and a passport photo (25x30mm).

Including zones up to 5, transfers to Orly airport (includes Orlybus, but not Orlyval), Versailles, CDG airport and also includes the Disneyland area are included.

It passes Navigo Discovery All the info

Another way to save is the Mobilis ticket daily nominative:

The RER are regional express trains that connect the center of Paris with the suburbs and surrounding areas, such as Orly and CDG airports, the Palace of Versailles and Disneyland. Has 5 lines: A, B, C, D, E. In the center of Paris it works like a metro, but in an express version as it makes fewer stops. Immediately outside the center, it travels to the surface.

RER tickets: in zone 1 it is possible to use the normal ticket + tickets. If, on the other hand, you have to reach another destination outside the center, such as eg. Versailles you have to buy an Ile de France or departure-destination ticket, therefore specific to the destination you want to reach.

Download the pdf map of the RER lines and related fare zones only:

There are so many buses in Paris that you can go almost anywhere if you want. The only problem is figuring out where they stop! Bus stops are harder to find than metro stations.

Tickets are the same as on the metro; a “t +” ticket (the one you will receive if you buy a booklet at a metro station) allows bus transfers up to 90 minutes from the first trip.

Keep in mind that the Paris Metro stops between 00am and 30am, while buses usually stop between 21pm and 22pm.

The Montmartre funicular is an inclined lift that starts from the base of Montmartre up to Sacred Heart Basilica, serving as an alternative to stairs. Tickets are always the usual ones on the metro or bus.

The stations of the main attractions of Paris

We recommend downloading the free app for iPhone or Android, which includes a metro map, allows you to calculate routes and also works offline. In short, a must to have.

How to visit the Basilica of the Sacred Heart, Paris

The Best Services in Paris

The Restaurants on the Eiffel Tower