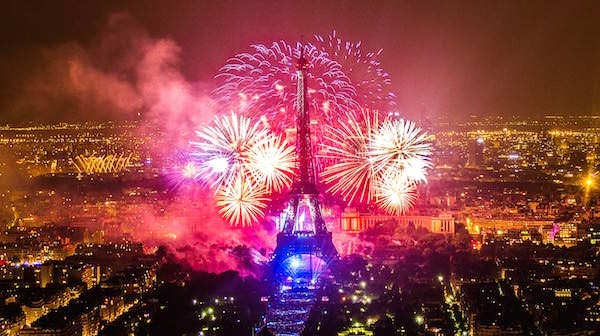 Il 14 July it is a date of great historical importance for France and for the whole of Europe.

In fact, in the distant 1789, this day began the French Revolution, with the storming of the Bastille (the security prison symbol of the Ancien Régime and of the royal tyranny) by the Parisian citizens who, thus, gave life to a path oriented towards democracy and the protection of inviolable human rights.

More than two hundred years have passed but Paris has never forgotten, and never will forget, this one great stage in the history of European civilization.

In fact, every year the anniversary is celebrated with national pride and with a strong sense of belonging to a community that fought hard for freedom, putting an end to the absolute monarchy.

A moment of great national joy which, if you find yourself in Paris as a tourist, you will not be able to and will not escape. On the contrary, you will get involved in the celebrations and have fun with the Parisians on this very special day.

Military parades, official ceremonies, fireworks displays, markets, dances and popular songs: it may happen that you really see all of the July 14 in Paris, and you will experience the fabulous French capital in a new and unforgettable way.

What does the program of the national day of France for 2019?

The topics of July 14 in Paris:

Let's start by traditional military parade organized by the Ministry of Defense: starting from 9 and 10 the troops will position themselves along Avenue des Champs-Élysées, undoubtedly the most majestic of the Parisian boulevards.


The president of the French Republic will also participate in the parade, whose arrival is scheduled for 10:10 am (to the sound of trumpets and drums!). The military parade, with many men, vehicles and tanks, will start at 10.30, will touch strategic places in Paris such as the Arc de Triomphe and Place de la Concorde, and will end at 11.45. At 12.00, the President of the Republic will leave.

One of the most evocative moments of the parade will be - around 10:45 am - the wonderful overflight of military aircraft that with colored smoke create the French flag. Everyone with their heads up!

The traditional firefighters dance it will begin on July 13, when the festive air is already in the air: as always, the day before the event makes the waiting for national celebrations even more exciting.

The firefighters' balls will begin at 21 pm on July 13th and will continue until 4 am, animating the barracks with music and entertainment, in some central areas of the city such as rue de Chaligny, place Violet in the heart of Grenelle, district a southwest of Paris, boulevard Port-Royal - or rue Carpeaux in the center of Montmartre.

Everyone can watch the traditional firefighters dance: some barracks charge a modest entrance fee (usually € 2 or € 3), others require a small donation to be thrown into a traditional barrel (again, an amount of € 2 - € 3 will be fine).

On 14 July, the traditional firefighters' dances will continue from 21 pm to 4 am, touching other barracks in other key areas of Paris such as rue de Sévigné and rue du Vieux Colombier.

The concert in Champs de Mars and the fireworks

On the Champs de Mars, a great free symphony concert (and very refined) at the foot of the Eiffel Tower. Will perform theFrench National Orchestra with the Chorus of Radio France.

The long day of July 14 will end with a flourish, with the spectacle of fireworks. Starting from 23.00 pm, i fireworks will be fired from the Eiffel Tower e from the Trocadéro Gardens.

For an optimal view, take a seat in the Champ de Mars at the base of the tower or see the spectacle from the Trocadéro square on the other side of the river. In any case, it is also possible to observe the fireworks anywhere on the Seine in both directions from the Trocadéro.

The sky above Paris will be illuminated for about 35 minutes and you will see the colors of the fireworks reflected in the Seine: it will be an unforgettable emotion.

A special way to experience July 14 in Paris - especially recommended for romantics traveling with their other half - is to join one dinner cruise on the Seine, with a unique view of the fireworks.

To find a place, book in advance!

Il battello Parisian Boats which we recommend will leave at 20pm; there will be live music throughout the evening and a 6-course dinner.

At the time when the fireworks will be fired, your boat will be in the right place, right in front of the Eiffel Tower.

It will be nice to have a front row seat to watch the bright show! The duration of the cruise is approximately four hours.

What to do during the day

July 14 is a national holiday in all senses and therefore banks, public and post offices are closed, but many museums, on the occasion of the celebrations, they remain open to allow everyone, tourists and residents, to fully enjoy the fabulous Paris.

Really important for a city that boasts an immense artistic heritage and a very high concentration of museums of classical and modern art.

In particular, few people know that the Louvre offers free admission on July 14th: why not take the opportunity to go to the most visited museum in the world and say hello to the Mona Lisa?

We dedicate the next paragraph to the main attractions that you will find open on July 14th.

The Palace of Versailles remains open on July 14, and you can also witness the spectacular water play of the fountains.

As we said, it will be open e can be visited for free!

Usually on this day there are not even large crowds, as Parisians are busy with many other things and many tourists do not know that admission is free.

On July 14 you can visit the National Picasso Museum (5, rue de Thorigny, Métro Saint-Paul), in the historic Marais district, which offers an exceptional exhibition area and the opportunity to admire around 500 works by the great Pablo Picasso.

Il Montmartre Museum (rue Cortot, Métro Lamarck) is one of the most evocative and fascinating in Paris and the one that best expresses the essence and atmosphere of this city.

For July 14 it offers the opportunity to visit the exhibition on the French painter and draftsman Georges Dorignac, Corps et âmes.

Speaking of the latter, on 14 July you will be able to see an exhibition dedicated to the impressionist painter Berthe Morisot, and the exhibition Le modèle noir de Géricault à Matisse, which explores the evolution of the representation of black subjects in the works of Géricault, Cordier, Carpeaux, Manet, Cézanne and Matisse and the photographers Nadar and Carjat.

Even the most important monuments can be visited on July 14th. These include:

And on July 14, don't forget to give space to gastronomic attractions of France!

French culinary delights are known all over the world for their refinement and elegance: soups, baked goods and haute patisserie: there is plenty of choice even for the most difficult palates.

To decide what to taste, read our guide on typical French dishes!